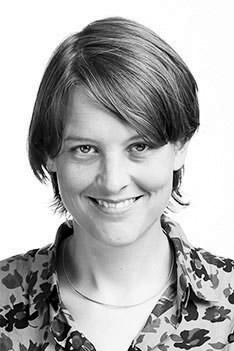 As of 2020, Judith became one of dRMM’s six directors. She joined the studio in 2009 and has since worked on a number of key schemes across various scales, stages and sectors. As part of her directorship, Judith pilots an ongoing emphasis on conceptual development across all projects. Her focus on progressing the studio’s design innovation works to elicit solutions that push conventional typological boundaries whilst consistently being defined by logic.

Judith’s project work at dRMM has spanned residential, commercial and industrial sectors. Her strength lies in ensuring design clarity and intent is transferrable to all project scales, in particular dRMM’s growing portfolio of masterplan schemes. Her extensive experience in managing production activities and liaising with stakeholders is a valued asset across project scales.

Throughout her years at dRMM, she has been Project Lead on a number of residential projects, including Television Centre Plot E – a 179-unit development formed as an articulated nine storey perimeter building with a row of townhouses to the south; and Brill Place – a 25 storey residential tower in Camden as part of the Central Somers Town Community Investment Programme. Judith was also Project Lead for dRMM’s Fenchurch Street project – a distinctive office building with stepped elevations. She currently leads the Wick Lane project, a mixed-use development comprising 175 homes over new light industrial units, retail and workspace. She also heads up work on Charlton WorkStack, a series of 14 workspaces for light industrial, creative and office uses on a compact inner-city site.

This variety and scope of work has crystallised Judith’s interest in urban typology development, examining contemporary permeations of mixed-use buildings and places and their evolving relationship with cities. She is interested in the concept of circularity, understanding the ways buildings can function as systems that are rooted in, and contribute to, their specific context – both materially and culturally. Her work on Bolivia Clásica – a school for the arts based in La Paz – exemplifies a novel approach to mixed-use development that combines learning, performance and civic participation. The school’s intention to redefine and reinforce each of these activities is framed under a new adaptable, process-driven, and sustainably built architecture.

Aside from her project management tasks, Judith also maintains a key role in dRMM’s resourcing and recruitment process. As part of this area of her remit, Judith is committed to championing diversity, building on the studio’s strong reputation for gender parity and extending this culture towards greater intersectional representation.

Prior to joining dRMM, she worked for LIN Architects on projects based in France and Germany, where she was responsible for the design and detailed development of the external envelope of the Cité du Design in Saint-Etienne.