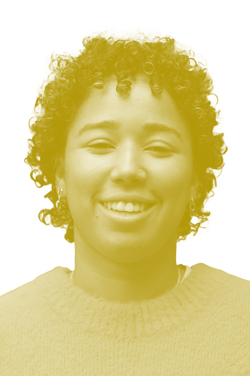 Myah is an Architectural Assistant at dRMM. They completed their part I at the University of Liverpool, where their final year project advocated for a new high street initiative centred around the political mobilisation of people in space. Myah continues to have a close relationship with the University of Liverpool, working in collaboration with tutors to organise workshops that use practical learning to address the issues of intersectionality in architecture.

Prior to joining dRMM, Myah worked on community led projects in Fiji. Here they supported Fiji’s National Development Plan and participated in infrastructure development. Myah led the design of a new carbon neutral dispensary in Tokyo Village from concept to completion.  It was through this experience Myahbecame interested in the benefits of collaborative practice and vernacular design to achieve carbon-neutral construction.

At dRMM, Myah is involved with the Smithfield Birmingham project, a large mixed-use development with retail and residential uses. Myah has been working on formulating coherent BIM information throughout the model and has been responsible for amending interior layouts to create a more efficient use of space.

In Myah’s spare time, they can be found at protests. They believe that participating in activism should be important to everyone and as non-binary person feel it can directly impact their life. Myah has featured on BBC Radio Merseyside talking on the topic of identity and the importance of intersectionality and played a major role in raising awareness on the naming of buildings, campaigning for the removal of the ‘Leverhulme Building,’ in Liverpool.