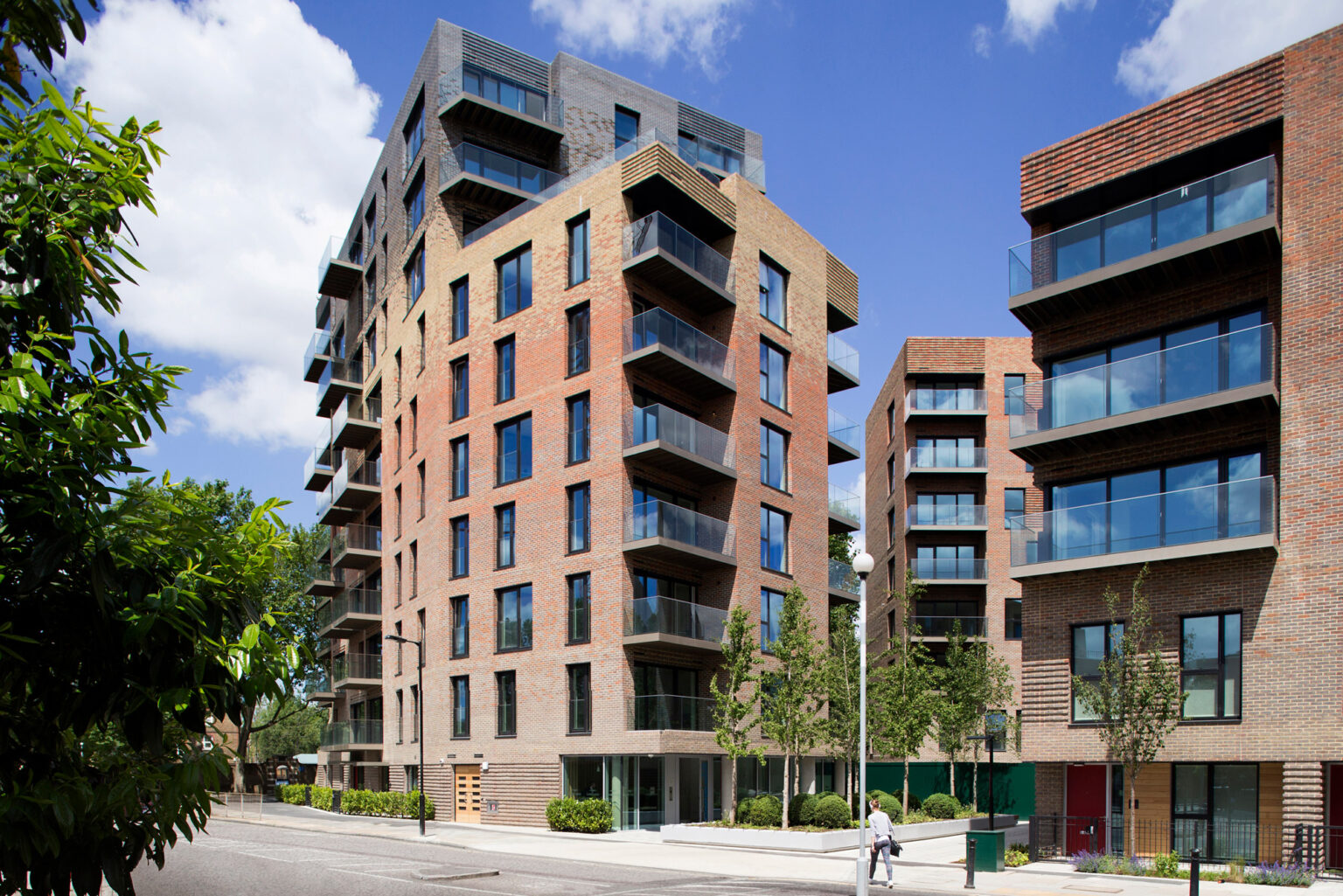 Trafalgar Place is a Stirling Prize-shortlisted mixed use project, delivered as part of the Heygate Estate regeneration in Elephant and Castle. It comprises 235 tenure blind high-quality homes, including 25% affordable housing, set within a new landscape and existing mature trees.

01 A disconnect between the buildings and landscape

Once dubbed "the Piccadilly of south London", Elephant and Castle suffered significant damage during the Second World War.

Post-war redevelopment resulted in the shopping centre, the Heygate Estate and the Northern Roundabout. This gave priority to vehicles and created a disconnect between the buildings and landscape.

By the beginning of the 21st century, the area had become synonymous with heavy traffic, street crime and high-density, poor-quality housing. Southwark Council commissioned the masterplan for its redevelopment and Lendlease managed it. Its aim was to restore the area to its former glory as a thriving place where people wanted to live. 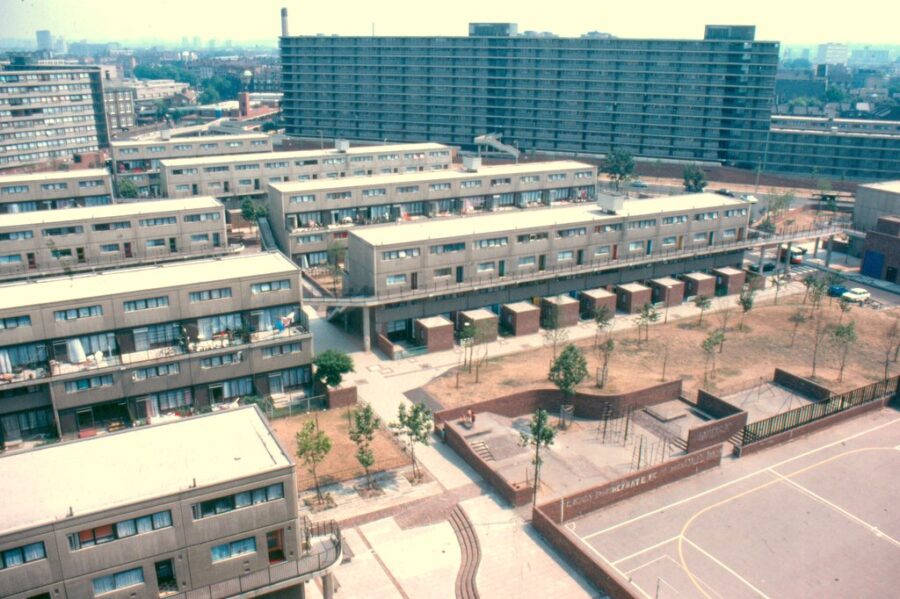 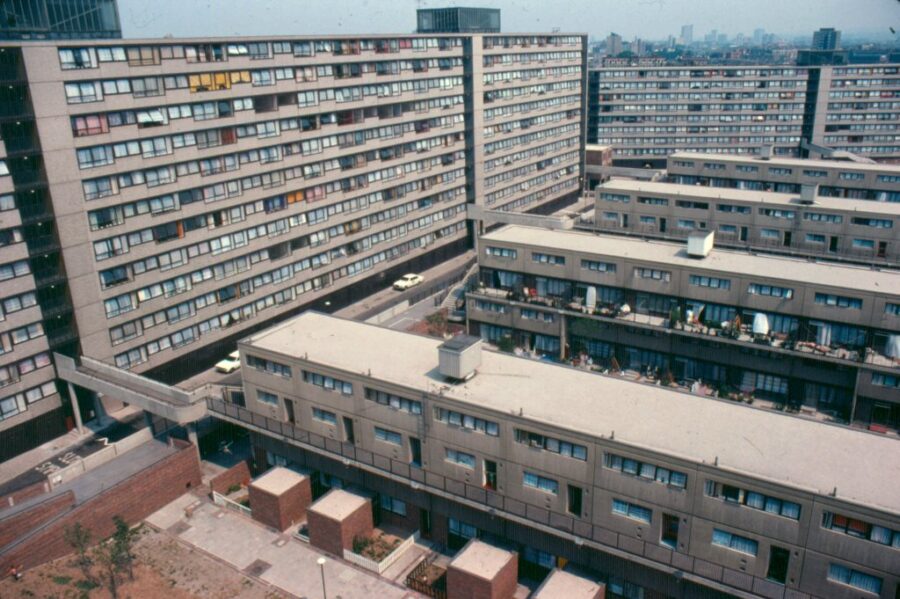 Trafalgar Place is infused with community, having been developed through extensive public consultation with local residents.

A mixture of mini-tower, apartment buildings and townhouses create a more human scale, in contrast to the 1960s mega blocks of the old estate. Every home has been designed from the inside out, maximising light and space, and each has its own garden, balcony or roof terrace.

Like a multi-coloured phoenix, the architecture counters the failings of the previous Heygate Estate’s alienating size and severe concrete mass by returning to the beauty of brick and its full spectrum of colours. 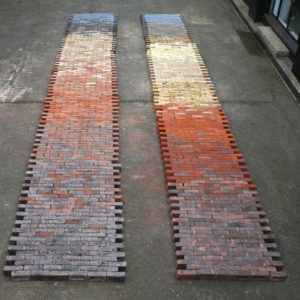 Testing the brick gradient in our yard. 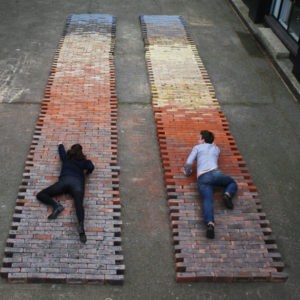 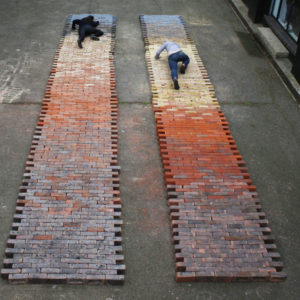 Trafalgar Place visible from the north in the context of the Victorian Victory Primary School.
03 Improved public realm

A new pedestrianised street and community space for residents to cultivate food and neighbourliness.

Working in close collaboration with landscape architects Grant Associates, dRMM and Lendlease sought to reconnect the dislocated adjacent neighbourhoods that were previously fractured by the impenetrable hulk of the Heygate Estate. The careful retention of 25 mature London Plane trees serves as a positive memory of the former estate. A new pedestrianised street has been created through the scheme, which, along with an internal private landscaped courtyard provide community spaces for residents to cultivate food and neighbourliness.

Beautiful brickwork at Trafalgar Place Sometimes you just have to test things at 1:1

Our family loves it and our friends are really jealous. We couldn’t imagine living anywhere else. 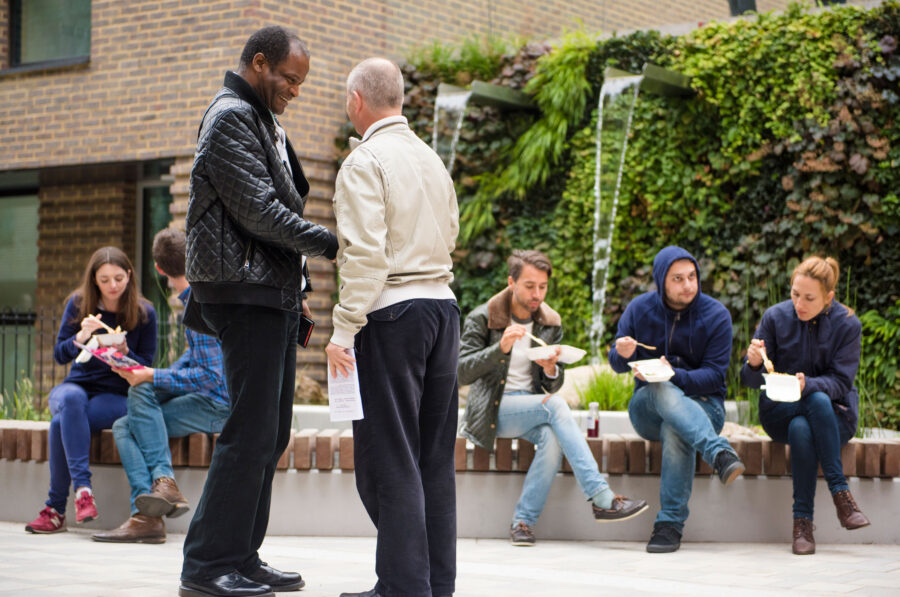 A neighbourhood party in the pedestrianised street that crosses the site - the new heart of the scheme. 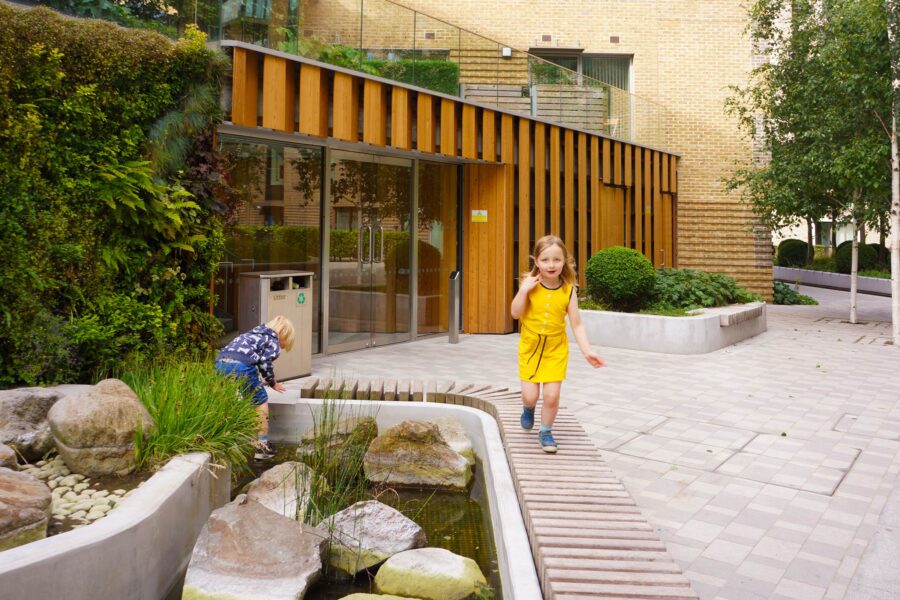 Pioneering the use of cross laminated timber to reduce the estate’s carbon footprint and environmental impact.

Trafalgar Place provides homes with a unique sense of identity; the scheme responds to the surrounding context whilst addressing its impact on the environment. Two of the buildings at Trafalgar Place are made from cross laminated timber (CLT) and demonstrate dRMM’s commitment to environmentally smart modern construction. Eight types of bricks are used, picking up the hues of the neighbouring buildings. Varying brickwork colours create “dovetail” corners, referencing traditional woodworking methods whilst whimsically playing on proportion and scale. The subtle brickwork detailing, as well relating to context, gives the new buildings a playful identity of their own. 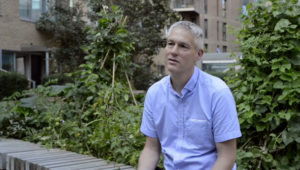 Erecting the CLT for two of the buildings took only six weeks.

We are incredibly proud of pioneering the use of cross laminated timber on the Elephant and Castle regeneration with Lendlease. The timber superstructure greatly reduces the carbon footprint of these two buildings and offers a clean, healthy, dust-free and anti-allergenic environment. Externally, the CLT buildings mirror the façade of the adjacent reinforced concrete building, proving that CLT need not constrain the design, and offers so much in return. 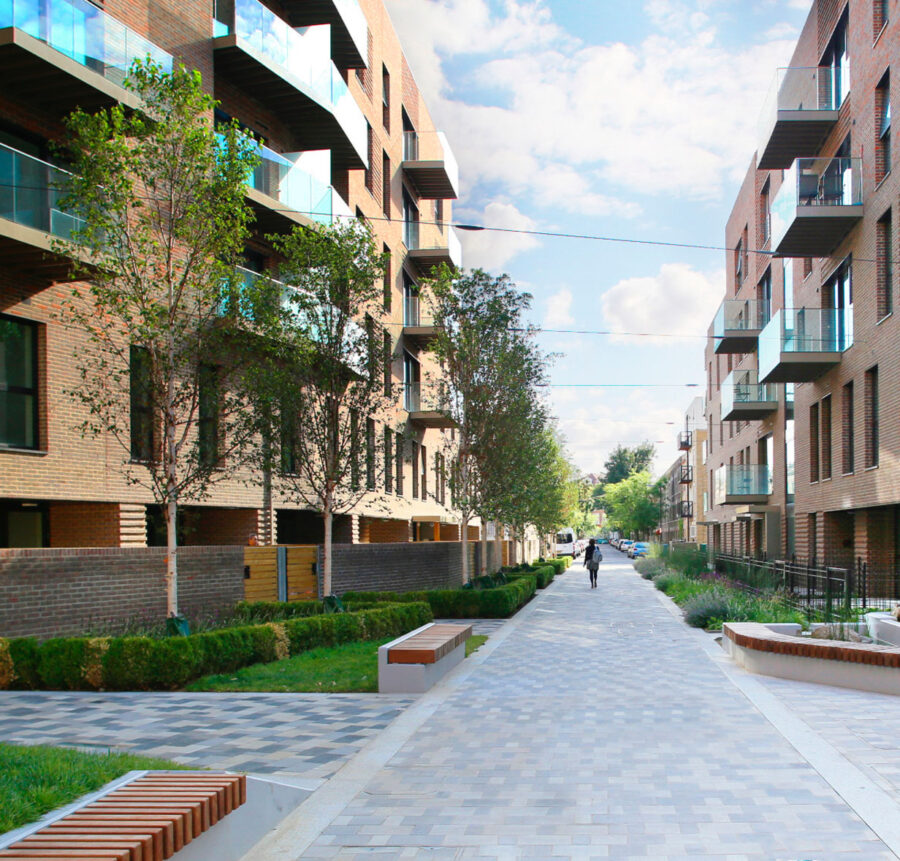 Paragon Walk, a new east-west pedestrian connection stitches the surrounding neighbourhoods back together. 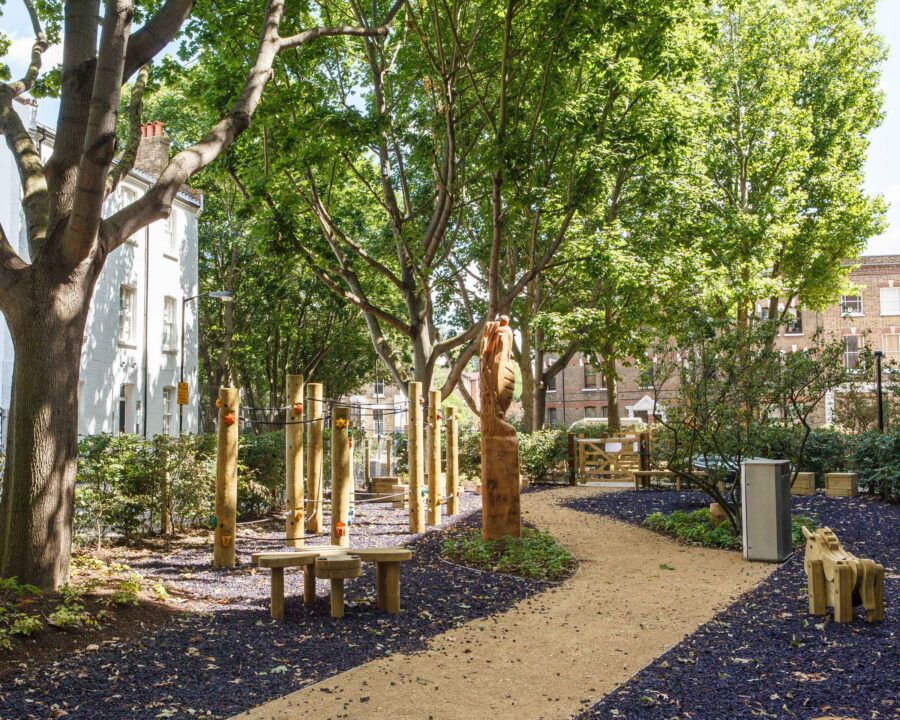 A woodland walk provides play space for children on their way home from the neighbouring Primary School.
05 A unique sense of identity

The effects of the built environment on residents’ quality of life should be paramount.

As London seeks to cope with its chronic housing shortage and improve inner-city areas, quality should not be forgotten in pursuit of quantity. The Trafalgar Place development shows how seemingly simple moves such as retaining all the mature trees on the site really help to improve amenity and strengthen the community. Placing importance on what the existing residents and neighbours value can help steer developers towards the right choices and make social and financial sense for all.

Exhibitions: London is a city for living 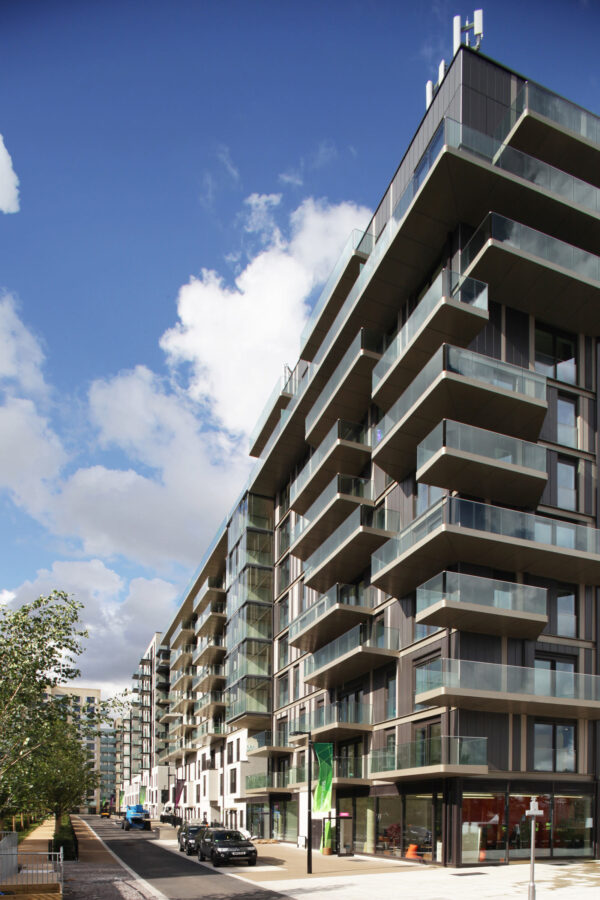 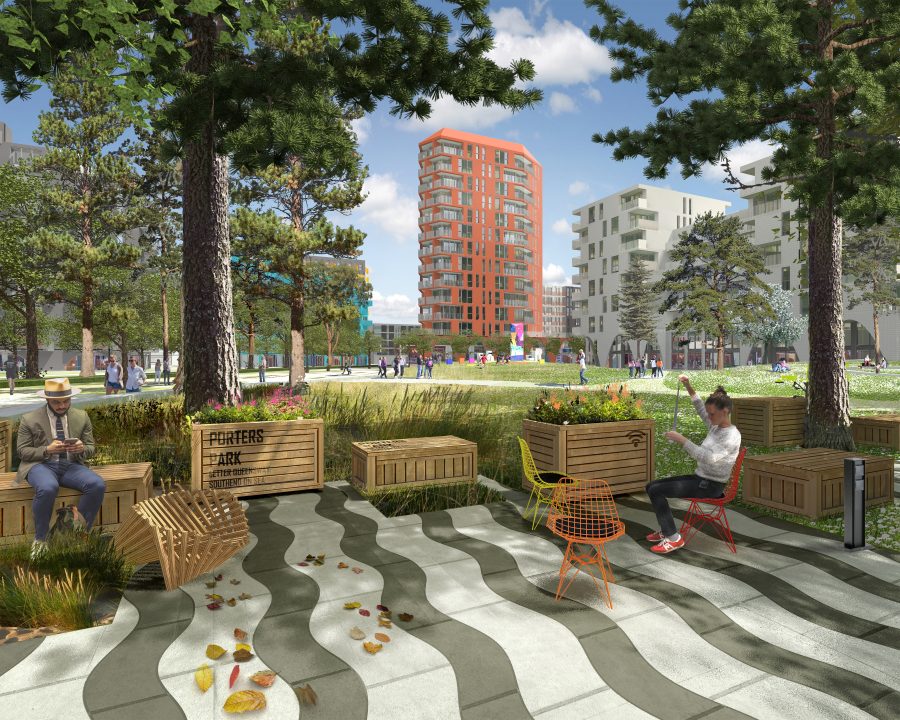 Masterplan for the regeneration of an Essex neighbourhood 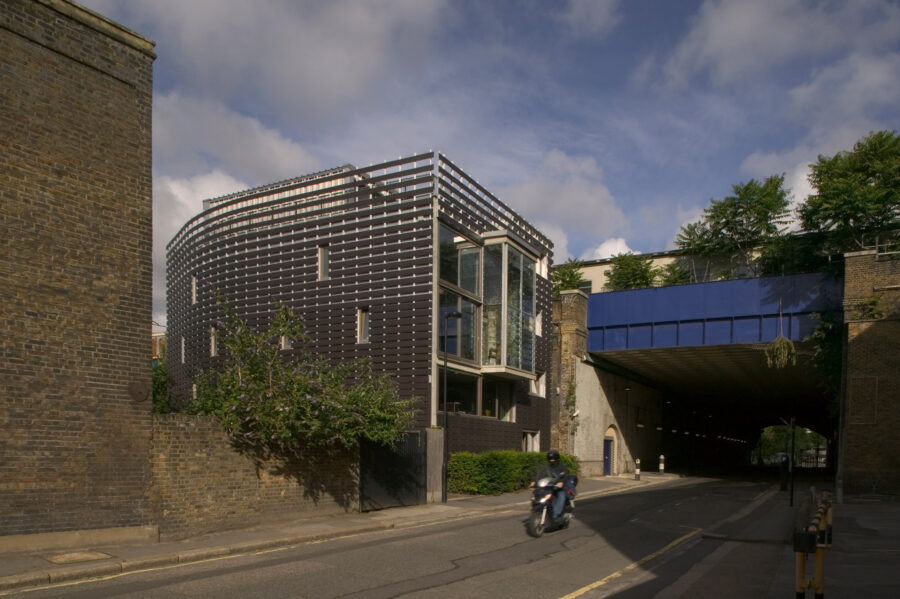 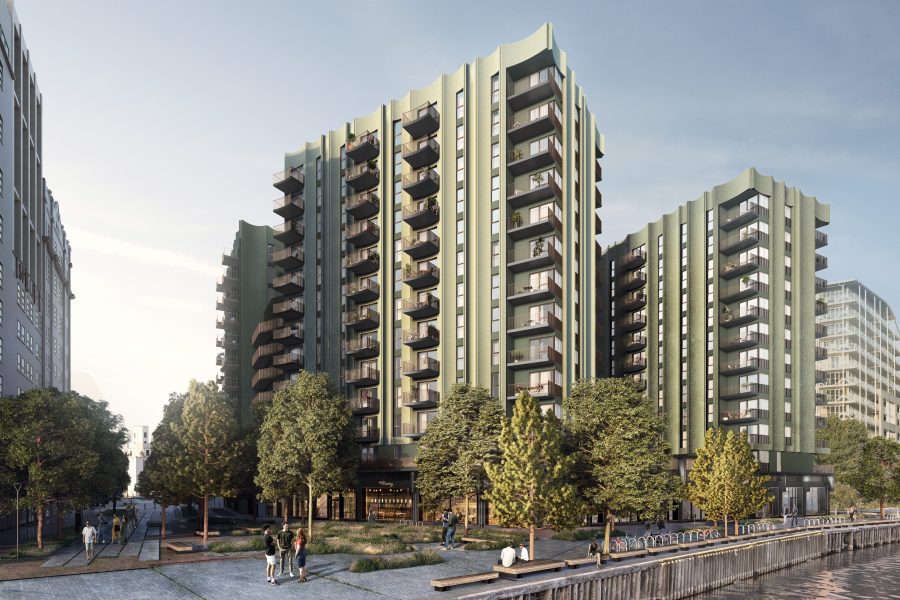